September 14, 2006
So if you follow the link, you'll see that a book that was supposed to have my pseudonym has another writer's pseudonym on it. Samantha Winston instead of Summer Devon.

Clearly someone's mixing us up. I mean there are some reasons to confuse us:

She writes smut.
I write smut.

Okay here are the differences:

She was a real model. Like really. I mean she worked for Elite. (Not sure I know what that is but it sounds impressive.)
I was an art model. They'll hire anyone.

She speaks English and French. And maybe other languages.
I speak English (after 7:30 am).

She lives in an elegant villa in France. (home of the best food, wine and scenery in the known universe [as voted by my ex-neighbor the Francophile])
I live in an aluminum-sided bungalow outside Hartford (home of more insurance companies than anywhere else in the universe. Also known as America's filing cabinet)

She is married to a professional polo player.
I'm married to a guy who would probably fall off horses as often as I did when I went to Camp Rim Rock, if he ever got on a horse, which he hasn't (Camp Rim Rock was only for girls). He has ridden an elephant once though--at the circus. Heh. But he didn't get a chance to try polo. 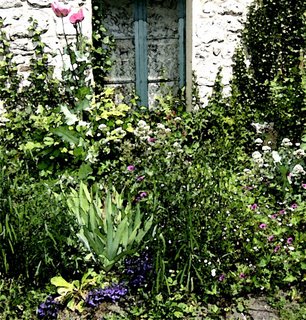 My garden: Oh bugger it won't let me load an image. You can check out the unidentifiable things here. It's fairly green except in the badminton area, where we have pounded the grass and weeds into dust. It's much easier to play on dirt.


So, the moral of this little story?
Any time anyone wants to mix me up with Sam Winston, hey, works for me.