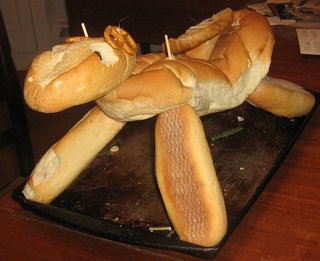 So what did you think it was?

It's just what I said: a horse made of bread for someone's birthday, as described in Joy of Cooking.

The middle sag happened after a day or two and the wooden barbeque stakes holding it together are more evident. The pretzel ears and raisin eyes were an addition, as was the bagel tail. I've turned past BBHs into french toast or bread pudding, but I think this guy is toast, as in no longer edible.