Showing posts from April, 2009
Show all

Come to Farmington Connecticut and write with me next Tuesday

April 30, 2009
I posted an excerpt over at erotic muses today. And I started yet another facebook group. I have no idea how to get people to partake in this sort of group so I'm guessing it might just be me sitting there in the Borders with my laptop. Next Tuesday, May 5. Cinco De Mayo! At least I won't be able to get up and do laundry if I get stuck on a tough passage. You know writing's going badly when doing laundry becomes a temptation. It's sad though. I went through the hundreds of names of writers I know and want to invite and so very few of them live within 100 miles of me. Bah.
3 comments
Read more

what's for dinner--messing around on a hot day

April 28, 2009
Trader Joe brown rice medley** cooked the way they told me to. That stuff is fun to bite--nice give to it. 1/2 of the TJ rice stuff mixed with chopped cherry tomatoes, garlic and red onion minced, some of last year's frozen basil, some lemon juice, balsamic vinegar, and olive oil. Based on L's recipe--except she uses plain brown rice because of the celiac factor. I added crumbled goat cheese because we have it. I'd never made this TJ medley before and I ended up with a lot. I tried a variation on a 90's salad standard: the other half of the rice with dried cranberries and toasted walnuts (I wanted almonds) and sesame-based salad dressing (I'm lucky enough to have some Krazy Kazu's) If we had oranges, I maybe put some chopped bits in. But we don't. And if I had any more red onion, I'd put that in too, but it's gone. And maybe as an homage to the original recipe, I'd add little strips of spinach--if we had any. Yum. I bet they'll be bette
Post a Comment
Read more

April 27, 2009
The hunky college boy down the street is stripped to the waist, mowing the lawn. He's showing off muscles, glistening with sweat. Your response: oh shit. Those shorts he's wearing look nothing like the ones the boyz own. They're going to want to get new ones, I'll bet. You're so obsessed with the new style of shorts, you only realize what an uncougar you are hours later.
Post a Comment
Read more

he's got talent in spades

April 24, 2009
but first.... the whole gay marriage thing went by so quietly here in CT. Rell signed the bill (not that they needed her to) that she promised she'd veto (not that it would have made a bit of difference). Kind of a disappointment. Where was the flash and excitement? Over at Dan Savage's place everyone's ready to buy Iowan and Vermont products to show support because those states are so right to allow gay marriage. Where's our reward? Huh? Skip the Vermont Maple Syrup! Buy the Connecticut insurance! Just for a little wave goodbye, here's the NOM (National Organization for Marriage) "the coming storm" ad and some of the mocking responses: http://www.youtube.com/watch?v=Wp76ly2_NoI&annotation_id=annotation_887222&feature=iv the original ad by nom http://www.colbertnation.com/the-colbert-report-videos/224789/april-16-2009/the-colbert-coalition-s-anti-gay-marriage-ad colbert's version http://www.huffingtonpost.com/lizz-winstead/the-storm-ga
Post a Comment
Read more

April 23, 2009
I posted over at erotic muses And pretty soon I'll post the pictures Sunny Lyn sent me. Those will go in her blog though. (See my last post since I'm too lazy to link) My blog seems to be pretty deserted these days. I do miss blathering on and on, but not enough, apparently, to blather on and on. I especially miss the voices of other people making fun of me on my blog. Here's what else I miss: Going to RT. Getting big contracts for my fabu books. Eating as much as I want and not gaining weight. Drinking water straight from the tap. We're not lying awake, worrying about the boil your water thing our local water supply put out yesterday. It's not a big deal.** After all, the only danger copepods can create for humans is when they act as vectors for dracunculiasis aka guinea worms ( don't click this link if you're squeamish and for god's sake, do NOT do an image search for guinea worm. Please). Those guys aren't found anywhere in North America.
1 comment
Read more

April 21, 2009
but Lyn and Lex are. They called me, which made my pathetic evening. No industry news from them thank goodness. Good, clean gossip, which is what one really craves from those events. Screw industry news which is always: 1. depressing 2. incomprehensible 3. out of date 4. something I've heard over and over and still don't believe OR 5. about other people who deserve the success they have achieved but do I have to be gracious at this moment? Lyn actually called because she wanted me to post pictures at her blog. So I did. Time to write something that'll make me money.
Post a Comment
Read more

why I'm not here today

April 18, 2009
1. It's Mike's birthday. Happy birthday, Mike. Hope you like the ridiculously extravagant presents I got you. I like one of 'em. Not quite a Greyhound bus but close to it. 2. Have you looked outside my window? It's freaking spring at last! The sky, the ground and everything in between 'em is gorgeous. 3. Unfortunately it's not so freaking gorgeous inside. Dirt, mess, dog hair, papers on nearly every surface. Somebody ought to clean this place and Mike shouldn't (see item 1) 4. If I do anything on the computer, it'll be edits on the reverse Daddy-Long Legs story. Now that Word and I are on speaking terms again, this might be possible. Yay me and my mad computer skills--which consists of removing nearly every bit of software on the computer and loading some of the stuff back. It seems to have mostly worked. Sort of. Outlook will never load again, which means I probably don't have your email address. 4. the oven's beeping--cake's ready.
3 comments
Read more

April 15, 2009
By the all holy god, Microchip, I despise Microsoft Office--Word and Outlook in particular, Since those are the only applications I use regularly, I just freaking HATE Office. I've been battling a software problem for days. I've used all sorts of detection software, and carefully deleted anything superfluous from my machine. It's better but it still freezes every half hour or so and must be rebooted. I'm not even trying to work at this point. Don't bother to tell me what I can do to make it better because the only thing I'm willing to do at this point (other than throw the computer off the deck) is delete all of Office and reload it. I ordered new copy of Office because when I tried doing dump/reload thing earlier, I was told I'd used up all my installs and when I called up to complain, well....... Never mind. Just never goddddddamn mind. If only publishers didn't do everything in Word. I'd be free of my chains and my burning load of hatred.
2 comments
Read more

April 12, 2009
...which means the computer must freeze. The M key must now be pounded in order to sort of work. The internet connection must be very dodgy and bug out at least once an hour. Every single calculator in the house must go into hiding. All the very uninteresting WIP plots that have been hanging around looking meh will suddenly develop intriguing possibilities. The kids will require a great deal of attention. They will squabble. The dog will develop the runs. And we will owe more than we ever have before? Oh, now that's nasty.
Post a Comment
Read more

April 07, 2009
Agentfail goes on and on and on. Ginger Clark** respond s. And I actually had something sort of potentially useful to add instead of just my feelings. Although while I'm adding my feeeeeelings, wtf is it with writers who think that just because they're pouring their heart and soul into their career--putting their writing above family and life--we should respect them more? Pity them perhaps, when their efforts don't work, but are we supposed to respect workaholics? I just want to kick them in the ass and tell them to get off the computer occasionally so they don't lose their friends and family or turn into a big whale. I've been guilty of monomaniacal behavior leading to whaledom so I'm hypocritical. But never in my career or lack of it, did I think other people should regard me with more than the usual amount of respect afforded anyone else. And why should your passion be Ginger Clark's problem? Since I've been in those shoes, I can guess why they wa
3 comments
Read more

April 07, 2009
I'm going to be interviewed on local cable access television tonight. I'm not supposed to wear red or anything with small patterns, so I guess my penguin pjs are out. Any other suggestions? Specifically, I'd like to find out how to rid myself of approx 20 lbs between now and then.
2 comments
Read more

reasons to love the internet

April 05, 2009
There is a new book review up for Somebody To Love (new as in it posted February. I don't check these ancient books) and the person reviewing apparently specializes in BW WM reviews.** Took me a moment to figure it out. Black women, white men. I recall that the book got reviewed on another website one that sought out books featuring larger than size twelve heroines. I wonder what other sites specialize in particular tastes in reading. I can imagine thousands (I won't): Mysteries that only take place in small English villages and feature older women. Heroes with a stutter. And yeah, I could throw in some very specific sexual kinks but there are so very very many. There is the Shed, which seems to specialize in spanking. I want someone to make a list of these sites or reviewers. Not me, because I am so lazy it isn't funny. But I think it's a useful sort of a list. I suppose tag words on Amazon can help, but lists are better. HEY, Does AAR still have books sorted into
Post a Comment
Read more 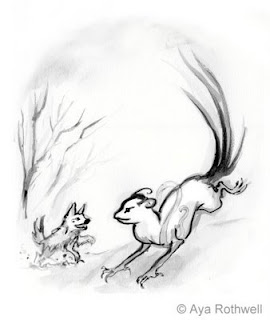 Mostly I'm posting to move that video down. It takes up a lot of room. LISTEN, if you're in BOSTON, go see Aya's stuff. I can't, so you do it. Thanks. In other news, my usual email address hasn't been working all day. I'm not ignoring you. Picture by Aya, used without permission.
Post a Comment
Read more

April 02, 2009
also good Burning Down the House by the Talking Heads or how about some Bruce--especially when you're driving? Spring music requirements: It has to have a refrain you can sing along with Nothing too complicated musically or lyrically Not too loud or metal because this is just bopping, not yowling music.
1 comment
Read more

April 02, 2009
but at least there I copied and pasted some worthwhile fun . Literature and SEX. Always a good idea (that first sex scene from Choke aside)
Post a Comment
Read more

April 02, 2009
how on earth do I let so much time go? Oh hey, that's the first line of the blog generator. And if I want to keep it short, this apathetic entry one works, to o. Here's a longer version of the apathetic entry with more specific anecdotes. I had to work out 20 times just to get the image of Krissi and Ephraim doing the Macarena in Wal-Mart out of my head. They were my best friends. Now I hate them. I don't need this malarkey, I have too much Grand Theft Auto to play to deal with that. and another site Hows that for generic? DO I have anything to say for real? For real, no. Not really. Unless you're one of the many, many editors I've called to judge our local contest and who's ignoring me. Then I have to say, please? Please? PLEEEEEEASE?
Post a Comment
Read more
More posts