Fortunately, I do have a nude picture. 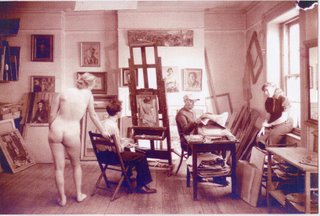 It's my mother. She was a nude art model too. This is a picture of her in Raphael Soyer's studio in the 1940s. (That's Raphael at the easel. I don't know who the other people are. If anyone thinks they might know, say a visiting relative, they should go ahead and click on the image to make it bigger.)

I had a couple of pictures of me that people who drew me gave me, but they were umm. kinda ugly. I don't know where they went.

Here's another one of mom. 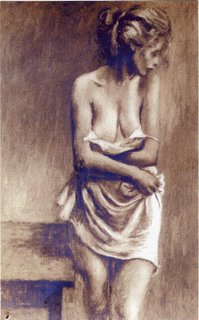 I have another one of her that's actually on the wall. A little one. Maybe I'll see if I can make a copy of it.