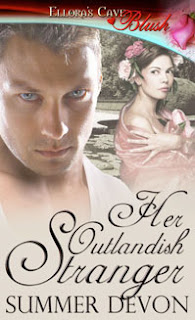 I wrote this a long time ago, just after I wrote Somebody To Love.

A couple of New York editors liked it, but after a lot of consideration (on both their parts) took passes because they couldn't think of where it would go in the bookstore. Regency set romance? Time travel? Or at least that's the reason I got for the rejections.

So now it lives where bookshelves aren't as important.


Let's lift the blurb from the site, shall we?

In 2310, Jazz White is one of few surviving soldiers of a hated regime. Now “reprogrammed”, stripped of many of his memories and killing skills, Jazz is an outcast until he’s summoned by the government’s elite time-travel agency and told he must journey to the 1800s. His mission—to protect Eliza Wickman, an English woman trapped in war-torn Spain. Once he arrives in the dreadful place, it becomes clear he’s been tricked. His real mission—Jazz must father her child, who will prove important to the future of civilization.

Guilt-ridden by his deception, Jazz must keep Eliza safe while he escorts her to England, all the while fighting his attraction to her innocent eroticism. But an agent from his time has other plans, and does his best to sabotage Jazz’s efforts. As the connection between him and Eliza grows, the agent could be the least of Jazz’s worries. His biggest fear is far more personal—what will happen once Eliza learns the truth?