October 17, 2013
I'm sure you're all dying to find out how the big NEW BOOK (Love Between the Lines) campaign went.


--gave away the book for 2 days on Amazon
--nabbed myself a spot on a few websites where I promo'ed until my fingers fell off**
Bev Kendall's place, bookbinge, Tina Donahue's place, and at least two other sites that I can't recall now. And it's time to point out that people like Bev, Holly and Tina are wicked generous, sharing their space and bandwidth with other writers. Yeah, I should do that again, but the two of you who show up here don't comment, I'm okay with it but I feel dumb when there are visiting authors.
--bought a couple of one day ads, like sponsoring Kindle Direct (why? I don't know)

let's not forget that I actually bought an RT ad long ago. (why? I don't know) And that the book got a pretty good review at RT and elsewhere...but that's in the past, so moving along to the three day blitz, let's take a look at some of the numbers.

* First, let's gloat about that give-away: 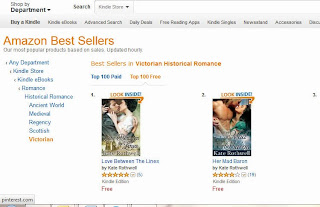 And what's nicer is that I can do screen capture in three seconds or less. Click and paste like my teenaged son.

Okay we can see that the give away of my books did well. There were two more of my books in the giveaway and all of them broke into the "hey, not bad!" territory at least once. Good old Mad Baron hung out near LBtL. I didn't even publicize the freebie nature of Mad Baron
(I did put LBtL at a couple of "my book is free!" sites. Note: I do not pay to advertize the fact that my book is free. I am not a schnook.)

Two days after the give-away, one day after the promo-ho-tour: 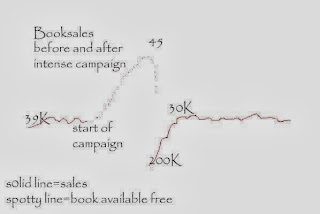 As we can see from the OLC, nothing much happened.

But in the spirit of "who the hell can figure this stuff out," Mad Baron is at 14K (it had been languishing at about 75K)

Next up, writing another book. That seems to be the best way to distract oneself from the woes of previous titles -- other than that overrated activity called real life.