Showing posts from December, 2008
Show all

December 29, 2008
The Kindle version of The Rat Catcher is no longer available. I know, because I took it down. The formatting was all screwy--random double indentation. I spent a little while playing with it, but couldn't figure out what I'd done wrong, even after reading all sorts of boards and FAQ.

Also gone: the Kindle version of The Italian Gourmet-Baby-Food Baron’s Ironically Pregnant Virgin Mistress. The cover wouldn't translate into Kindlese and some of the authors were hesitant about charging when it was free elsewhere. (Amazon made us charge at least 99 cents)

I still think this Kindle thing is the wave of the reading/publishing future. Now I think that particular future's a little farther (further?) ahead in the timeline. Not this week. Or last week, or whatever.
1 comment
Read more 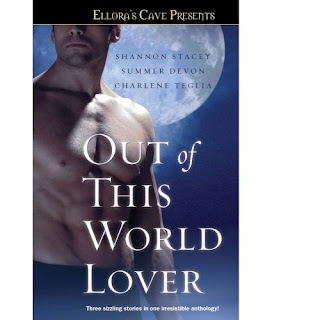 Summer's (and Charlene's and Shannon's) book is out! Better read this a couple of times. So far it's my only 2009 release.
1 comment
Read more 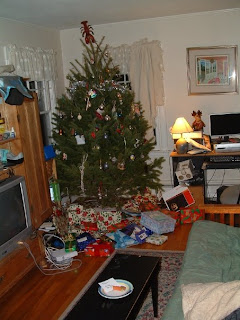 I hope you got what you wanted for the presents? Anything good?

Here is our messy tree in our messy family room. Note the traditional lobster. Also in picture: on the piano bench, a cookie partially eaten by the fat man and a carrot nibbled by reindeer. By the lamp, the CVS reindeer that sings "Grandma Got Run Over By A Reindeer." Missing from photo: Flirty Fir. No tacky singing object this year. I guess my friends have stopped loving me.

The 25 year old bagels are gone, eaten by a mouse sometime between last Christmas and last week when we pulled out the box of mousy-turded and nibbled decorations.. Not so much of a trace of the two bagels remained.

I will now go use my new Mr. Coffee to make more coffee.
7 comments
Read more

December 22, 2008
I wanted to love this book and almost succeeded. The first half, yes. But the second part nearly wrecked the first half. Much of the small, but important, charm dissipated (as it turned into a regular sort of a story with the sort of ongoing action we're used to in books rather than introspection)...and it had too many incidents that bordered on twee.

Cold, hard reality pushed away with books and reading--that was the point of the whole exercise and it was lost in that second half which was too modern, not to mention too neatly tied up when the truth is sometimes you can't do more than cope and that's why books help.

I took the failure personally and I think I finally figured out why.

When I was young I had an English friend named Rosemary who could and would drag up quotations to fit any moment. Rosemary was at least 40 years older than I (older than me is what I want to write, so it must be wrong), but she was my friend. She didn't allow nonsense like age get in the way…
Post a Comment
Read more

golly, I've never had people waiting for me to blog. Maybe I should put this off a bit. Make you read the details of my last dentist visit or a cute story about my kids?Ha? ha? No? Jeez ok, ok.

a question for readers

December 20, 2008
Are you more likely to write notes to authors about their free reads? Because I've gotten four this week and that's four more than I've gotten about any book for a while.

Tomorrow I will put up another free read. I only get one chapter. The fun part of this one? The basic plot was drawn up by someone else. Ms. Tumperkin is the director.

I liked this system. Feels like the best part of a reading exercise. Now I'm convinced that the best of all possible careers for me would be as a cog in a huge novel-writing machine, where I get handed an assignment ("this story will include three dogs, five mentions of corned beef hash and a ride in an airplane") and told to follow directions. I would have been a happy harlequin writer back in the days when they didn't let you have your own name.
3 comments
Read more
December 19, 2008
I'm reading Eloisa James's latest, When the Duke Returns, and loving it. Been a while since I've liked a romance this much. Must be all the snow. (The snow here, not in the book. Makes reading feel cozier.)
Post a Comment
Read more

December 19, 2008
I was watching a kid edit video and remembered back in the day of Super 8 or 16mm. Catchunk, thump. Cutting the film, splicing the film. That's what they did when I was a student in the dark ages.

I started a list of jobs that have basically been transformed in my working adult lifetime. You know what I mean--the people who spent years perfecting their X-acto knife skills for layout stuff that's now done with a click of a mouse. My half-assed list includes:
film editors.
Actually anyone who does anything with movies, except maybe the actors
architects
magazine/newspaper/book layout people
copy press operators (I remember Cathy at Gnomon copy doing calculations on paper for god's sake)
computer operators
Ummmmm. Okay.

And now I'm going to go look for some Kleenex and admire the snowfall. Coming down like crazee. Has to be more than an inch an hour.
4 comments
Read more

I can't seem to work--all I want to do is sip tea and moan. I'm surrounded by a jumbo box's worth of used Kleenex. OmiGOD, I hate colds. They are unpleasant and undignified. My nose has gone rabbit. I sound disgusting. And, jeez, I am not sick enough to make anyone actually feel sorry for me (other than me, but that's SOP). I mean, it's just a rhinovirus.

Here's a warning: don't lick your computer screen when you're on this site, because I swear it's a hell of a cold and probably that contagious. Don't lick it anyway because that's pervy, yet not interesting enough to be a new twist in smut

December 17, 2008
1. Summer's release next month got its first review. It's a good one, too. Yay! This is an anthology with Charlene Teglia and Shannon Stacey. It really is fun being in a book with a couple of people I sort of feel like I know. I've even actually met (and embarrassed) Shan. We can send each other did you see that? notes and make obscene comments about the cover. We haven't done that second thing.....but we could if we wanted to.

2. And Kate. Sad, sad Kate. I started messing around at Lulu and got myself an ISBN. Delusional. It starts with an ISBN and any day now I'll be peddling it door to door. At least the book there is less than $14 now. Only 11 dollah seventy cents. So now you can buy The Rat Catcher from Mr. Lulu, buy it for your Kindle for $2.40. Or you can get it free at the link on the upper right of this page.