Showing posts from August, 2013
Show all

Tom and I are trying to make a nice badge for people who won the Charter Oak contest.

Free book! Act now or you'll have to pay later!

And it's at #3 in Romantic Comedy -- which is also odd because I didn't say it was a romcom. It has moments of humor but it's hardly laugh-out-loud funny stuff.

This tells me that either someone else can add labels or I was not operating on all cylinders when I listed this book at Amazon.

In other news, the Spanish version of Take a Walk on the Wild Side is an earworm. Makes sense--Lou Reed's version essentially defines earworm material.

August 28, 2013
One of the writerly tasks I avoid is checking an ebook before it goes to print. I'm not a great proofreader and that's what the job requires. I also have to find and collect "praise for this book" that will go in the front of the print version.

Our book is almost overdue (sorry) so I'm doing that job now. I can do the search pretty late at night so I am, hoping it will make me sleepy but... hey wow! I'm having a Sally Fields moment gathering the reviews for The Gentleman's Keeper.

Sometimes looking for good reviews is difficult because you have to slog through a wasteland to find them. This? It's a sunny day, it's picking a bouquet of sweet daisies from a huge field of perfect flowers .... with only a couple of slugs in there.

I pluck the slugs and set them free. Naw, I sprinkle them with salt and then stomp on them.

What I've got so far (and I think I'm done now. Unless you want to send me your fulsome tribute.)

Does Not Adjust to Transition Time Well

August 27, 2013
back to school
I want routine of school days...I hate losing any boys from my house.
I will be grateful to have less mess...It will be too quiet.
I enjoy alone time...Where is everyone?
I can reclaim my space...I don't freaking need that much space.
I am glad they are growing up--are grown up. This is the path life is supposed to take....I want my babies back.

August 21, 2013
You know what I love? Lines like this:
I like Summer Devon’s work precisely because she’s a competent author who writes well and you know exactly what you’re getting when you pick up one of her books.

That's from a review of Sibling Rivals out in October. The reviewer liked the book, but it didn't set her world on fire. 3.5 out of 5 stars. Pleasant but not enthusiastic review.

When I headed over to goodreads, I couldn't help but notice other people were hmm about the book. Of course now I'm in a raging tizzy of fear.

I get pretty good reviews. I'm no constant five star queen but, yeah, I'm used to a general "go, Kate/Summer!" Maybe this one will not quite get the same applause.

And I tried to think what was different about this book?

I might have an answer. I think I know who to point a finger at.  I have someone to blame if this falls on its face. 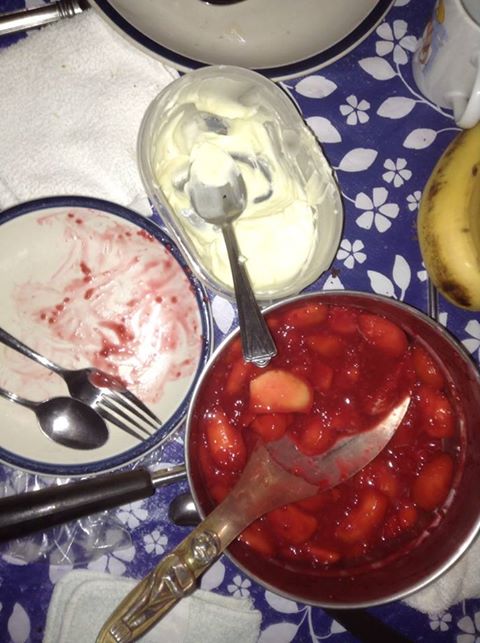 My new, can't miss idea!
A Tastier Than It Looks Cookbook... as featured on the Facebook!

clockwise from left:
Empty pancake plate (plenty of good recipes for pancakes. I like this one but I separate the eggs and whip the whites).

Far right--cameo appearance a banana (not appearing in this recipe but you can add it to sauce if you want. I bet it would be tasty.)

Plate the pancake (don't you love that verb? Yes, you do). Glop on white gunk. Glop on fruit sauce. I can see this working in a crepe, and I suspect the two sauces would do we…
Post a Comment
Read more

Psst. Hey! How about a free book? 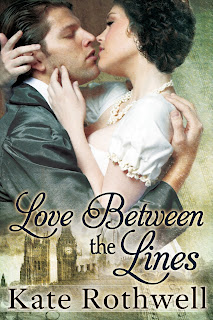 Email me, katerothwell at gmail.com I'll send it, no strings attached. Obviously I want people to post reviews and that's why I'm giving it away. But if you can't bring yourself to write a review, I won't hold it against you. I know how it is.

I've just discovered that the more people who have copies (who got them from me rather than stole them from pirate sites) the more copies I end up selling, eventually. So okay? Let me know.

Consider this note a form of netgalley -- and the pre-real-release party continues.

Danger won’t deter this intrepid reporter—even when life and love are on the line.

Sir Gideon Langham wants the best for his flagship newspaper. Hiring daring female reporter Lizzie Drury, aka “Trudy Tildon,” seems like a smart decision—until he finds himself falling for her. He knows she’ll risk everything to get a story, including one …
Post a Comment
Read more

Out early, out often.

August 15, 2013
"LOVE BETWEEN THE LINES releases October 15!"
Except wait! RT Magazine just gave it 4.5 stars. By the time 10/15/13 rolls around, anyone who read the review ("The characters are colorful and animated, befitting a thrilling story line") will have forgotten all about the book. What to do? How about a Shhh temporary sale? So for anyone who read RT Magazine, or who reads this post, here's a link to a pre-wide-release lower price.


The above paragraph is the note I just put up at Facebook. Welcome to my new book's non-release release (or soft opening as we in the new business trade call it, I think).
Here's where it's happening:
1. At this blog (hi!!)
2. On facebook
3. At my webpage that doesn't change much--but did for this occasion.
and
4. RT Magazine, electronic October edition, which mentions the book as available at my webpage.

I also just posted a single twitter about it.

Otherwise, I think we'll all just go about our business and pretend…
Post a Comment
Read more

August 10, 2013
POPULAR FICTION
Once upon a time, a girl who wants to be a rockstar/artist/inventor works very hard and despite (or maybe because of) competition from a man she's attracted to, she makes her goal. She and the guy end up together too. The book ends with her waving at a crowd after winning an award.

LITERARY FICTION
Once upon a time, a girl who wants to be a rockstar/artist/inventor works very hard. A man she's attracted to fucks her up. They might end up together anyway. The book ends with her staring at a pattern on the wall. She might be nuts, or maybe the world in which she lives is nuts. A fetish for poo is involved in her downfall.

MAGICAL REALISM
Once upon a time a girl who wants to be a rockstar/artist/inventor works very hard. She faces competition from a man she's attracted to so she bakes him special brownies, the very scent of which makes people cry. He and the whole town learn to appreciate life and the girl in a new way. She might or might not win any award…
1 comment
Read more 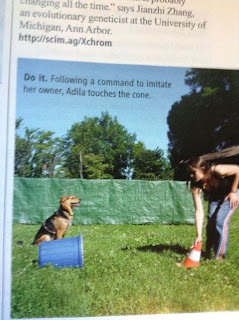