A new book out today!!

December 31, 2013
I swore I wasn't going to make this blog about promo, but then I notice it showing up on Amazon and Goodreads (I put it there so this shouldn't be a big shock) and I had to wonder: do people want to read about the dog's bloody ears? Will that make them buy our books? Or will I do better linking to
THIS NEW REVIEW OF OUR NEW BOOK
and
THIS OTHER REVIEW OF OUR NEW BOOK.

I think you can see where I'm going with this.... A NEW BOOK OUT TODAY! YAY US! 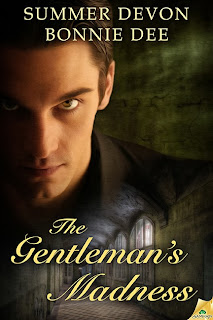 This one is a little darker than our usual story. It was easy to write in some ways (built in conflict, two characters we liked) and harder in others.

For a while in Maryland, I worked at a halfway house, and as we wrote, I got to remember that part of my life and draw on it, a bit.

I worked the weekend shifts in level 4 houses (level 1 residents were almost independent, level 4 meant they were teetering on going back into the hospital.)

I have some of that experience in another short story I wrote soon after that time. It is most decidedly NOT based on people I knew there. The first person character is not me. The other characters, no one I met. Some of the rules and whatnot, yeah.

It's a freebie here and was originally published in Metropolitain, a literary magazine that was published in PARIS freaking FRANCE. No, I'm not making that up.**

And actually, back to Gent's Madness, Bonnie wrote much of the interactions with Tully and the other patients. I avoided that, probably because of that haul working in the halfway houses. Hey, I did the research on Victorian cures and diagnoses.

_______
**You can tell the story is old, though, what with the talk about beepers and the phone book and no PCs and mention of music on MTV